It’s always valuable to get real-world feedback from users, especially before launch. Google Play makes it easy to distribute pre-release versions of your app to alpha and beta test groups anywhere in the world.

In the APK section of your Google Play Developer Console you’ll find the Alpha Testing and Beta Testing tabs. Here you can upload versions of your apps’ APK files and define a list of testers as a Google Group or Google+ Community. Once this is done you’ll receive a URL that you forward to your testers, from which they can opt-in to the testing program. 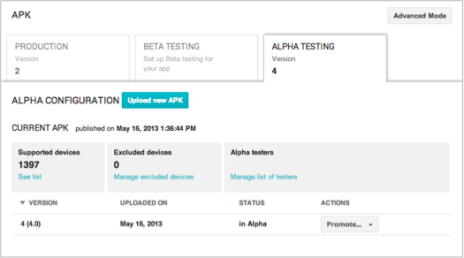 Note that users cannot provide feedback and reviews on alpha and beta versions of your apps. To gather feedback you could used the Google Group or Google+ Community, or setup an email address or your own website.

You can use these testing programs to optimize your apps, help with rollout to new markets, and start building your community. There is also more information on using beta test in the Launch Checklist and Localization Checklist.

Using the Google Play Developer Console, you can select groups of users to alpha/beta test different versions of your app and gradually roll out an app update over time, known as a staged rollout.

Set up an alpha/beta test

With the alpha/beta testing tools available in your Developer account, you can test different versions of your app.

Note: When you’re starting a new alpha/beta test, it’s a good idea to start with a small group of alpha testers, then expand your test to a larger beta test group.

Step 1: Add an APK to your alpha/beta test 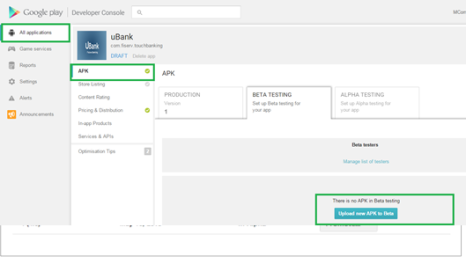 reg the difference between Alpha and Beta testing, refer Q&A section at end of document.

Note: If a user is eligible for both alpha and beta versions, they’ll receive the alpha version.

Here’s how you add your Google Group or Google+ Community to your list of testers and share a link to your app. 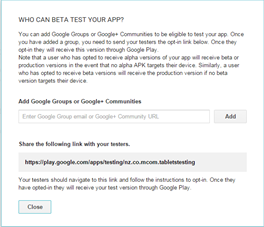 Note: When you add a test group, make sure to use the following formats:

Note: The opt-in link only shows when an app is “Published.” Apps in “Draft” or “Pending publication” won’t show the opt-in link.

After clicking the opt-in link, your testers will get an explanation of what it means to be a tester and they’ll be able to opt-in.

Once your alpha or beta testers have opted-in and installed your app using the link you provided, they’ll be automatically updated to the test version.

Because your testers can’t leave public reviews for alpha/beta apps on Google Play, it’s a good idea to let them know where they can provide you with feedback (an email address, website, etc.).

Alpha and beta APKs need to have a higher version code than production APKs to be available for testing.

1.What is exactly the difference between them, especially between Alpha and Beta?

2.Only the production stage is available for people on the play store, right?

Yes, that is correct.

3.which one/s allow to publish only to specific people/percentage , and in which way do you do it?

You can do that for both. To do alpha,beta testing you need to send invites to people on their google+ accounts so that they can access your app and be able to download it. The invites is usually in the form of a link directing them to your app on the play store which is only visible to them after they accept the invite

4.which stage allows in-app billing, at least for testing ? I don’t get why can’t i test it out even before uploading the app.

You can do in-app billing for both alpha,beta testing. Check the link:http://developer.android.com/google/play/billing/billing_testing.html

5.in the percentage method, if I publish a new app version using the same way, will it first update for the people who were lucky enough to install the previous version?

As far as my experience goes, i have seen people who were testers get the update for the app first than everyone else. But i am not so sure about how does it work exactly.